Today marks the one year anniversary of the worst disaster in the history of the garment industry. 1,129 people lost their lives at the Rana Plaza building collapse in Dhaka, Bangladesh. 1,129 human beings. 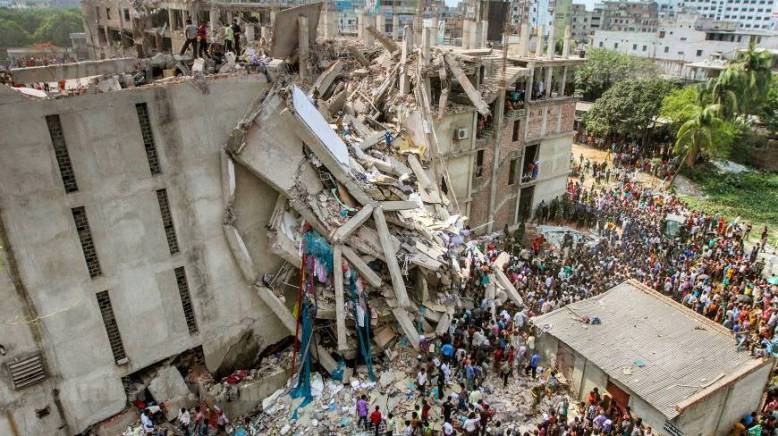 Initial investigations found that the four upper floors of the building were constructed without a permit and that inspection teams had found cracks in the building’s foundation the day before. Even though workers expressed their worries, factory owners ordered them to come into work that day.

Workers in this building produced clothing for a number of retailers, including Benetton, the Children’s Place, Joe Fresh, Primark and Walmart. In response, many companies promised to make changes, but they divided themselves into two factions.

The European-led Accord on Fire and Building Safety, which partnered with several labor unions and includes companies like H&M and Primark, put together a binding agreement to establish a fire and building safety program in Bangladesh over the next five years. The program would cost about $3 billion, a reasonable amount for such successful companies.

Many American retailers, including Gap and Walmart, refused to sign the Accord out of fear that they could face legal liability. Pretty sad, right? They decided instead to form the Alliance for Bangladesh Worker Safety, through which members could voluntarily contribute to a safety fund currently standing at a mere $42 million and provide only $100 million in loans to improve factories.

Not only are the retailers not obligated to provide any of this money, but they lack worker involvement and completely control the inspection processes themselves. If you look at the Alliance’s website, you’ll notice that their inspection reports are not as detailed as those of the Accord and are even hard to locate.

It’s despicable that so many companies – retailers that you and I have probably shopped in before – are so unwilling to take legal obligations and to be as detailed and transparent as possible in order to protect the lives of millions of people.

Bangladesh is the second largest clothing apparel producer in the world, with 3.6 million workers employed in the ready-made garment industry. And Bangladesh has great laws in place. The Worker Rights Consortium’s Scott Nova told PBS NewsHour:

Bangladesh itself has reasonable standards on the books. They have reasonable labor laws on the books. They have a national building code. The problem is the national building codes in Bangladesh, the labor laws are works of fiction. They’re completely ignored by the factories who are serving the relentless drive of Western brands and retailers for ever lower prices of apparel.

When fast fashion overtakes factories, it leads to new hires, overcrowding, intense speed and pressure and a decline in safety standards. And honestly, much of the blame for such standards does lie with the retailers themselves. Yes, factory owners and regulations play a role, but when companies don’t make the effort to make sure their clothing is being produced in the safest conditions, they’re risking lives. They should do whatever it takes to protect workers, and for companies that earn millions and billions each year, this should not be a financial problem.

My heart has ached all day today, and it’s been aching for quite some time. I’ve devoted the final project of my graduate program to a strategic communication campaign through which a nonprofit organization can influence American retailers to implement a certain set of safety standards in its South Asian garment factories. It’s not much, but I do hope to share it with nonprofits who can work to make a difference.

In the mean time, what can you do?